The Age of Digital Border Security 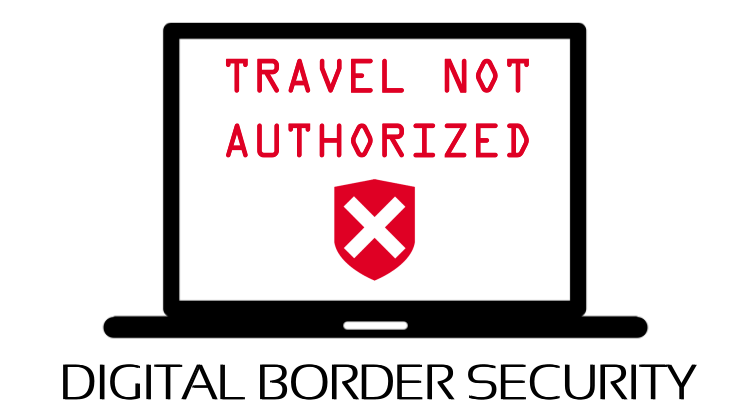 There was a time not long ago when people could travel from country to country without facing travel restrictions or additional screening based their citizenship. Now with terrorist attacks becoming a growing concern, border security authorities around the world are looking for effective methods to ensure that foreign nationals who are deemed possible security threats are not allowed to travel in the first place.

Although there are many biometric technologies such as iris and fingerprint scanners that are useful for combating passport or identification fraud at the border, there are numerous promising digital technologies which can prevent an individual from even boarding a plane or sea vessel.
Here are a few examples of how digital technologies are playing a larger role in helping create digital borders for stronger border security.

Online Travel Authorizations - Electronic Visas and Visa Waivers
The European Union will soon be beefing up its border security with the rollout of the European Travel Information and Authorization System (ETIAS). The ETIAS will utilize several new and existing border security technologies as part of its border security infrastructure. One of the more interesting aspects of the system will be the eu-LISA that will be the backbone of the unified Smart borders for the European Union. The Smart borders system will pull data and biometrics (e.g. facial recognition, iris and fingerprints) of travelers entering European Union countries across various border crossings to perform manual and automated border controls. The system is undergoing further concept testing and is expected to be deployed along as part of the ETIAS in 2020. Europe isn't the first to implement an electronic travel authorization system. The United States ESTA, Australian eTA, India eVisa, Turkish eVisa and Canadian eTA are all systems currently in use for obtaining electronic travel authorizations to their respective countries for business, tourism, transit or other common travel purposes.

Social Media Analysis
Governments such as the United States are asking applicants of its online travel authorization, the ESTA, to provide information about their Twitter, Facebook, Instagram, Twitter, YouTube, Google+, or other social media accounts. The intention behind wanting access to such information is likely due to border authorities wishing to learn more about the sentiment and emotion to determine if a traveler poses a potential security risk to the public. The practice may be controversial, yet given the nature that online radicalization through social media plays a role in terrorism, border authorities are understandably wanting to know more about individual applicant's personal lives and can analyse such qualitative information using available social media data analysis technologies.

Global Background Checks
Aggregating and corroborating criminal histories from across the globe for an individual used to be a concept of fantasy. Now, there are dozens of companies focused on providing such solutions to governments, businesses, and individuals worldwide. Typically, on most travel authorization applications, an applicant is asked if they have a criminal history. People may or may not answer such a question truthfully, yet regardless, governments reviewing the travel authorization application can automatically perform global criminal background checks on such individuals and determine if an applicant is lying based on if the information they provided matches against a known offender in the criminal records database.

Internet Protocol (IP) Address Analysis
Most people probably don't think much about where or how they access the internet nor the importance of their overall user profile when accessing websites used for submitting travel authorization applications. A user's Internet Protocol (IP) address can give authorities information on an applicant's country, region, state, and city as well as other details regarding the Internet Service Provider (ISP) utilized to establish the internet connection. Border authorities can use the IP or ISP information to cross-check against those of other individuals who may be under investigation or surveillance to determine if there may be a connection amongst the applicant and other users sharing similar IP characteristics.

Digital technologies are being used to assist border security authorities in assessing possible threats posed by applicants of online travel authorizations. Although it's early days to draw conclusions on the effectiveness of digital border technologies, the next few years should serve as a strong indication of their ability to deter terrorism and crime.