Around the World in Iconic Literary Cafes 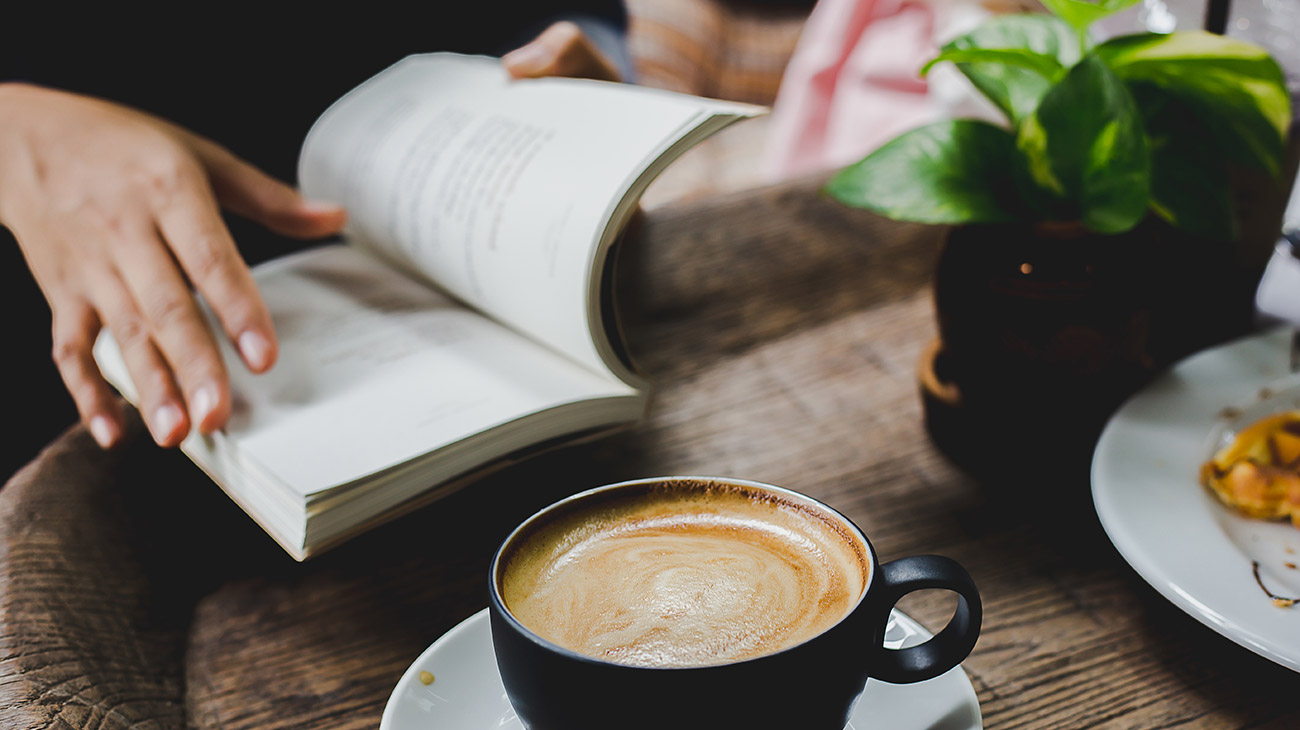 Do your days consist of getting lost in a good book? Or, are you an aspiring writer who studies the great authors before you? Whichever side you land on, book lovers flock to literary cafes—following novelists, from classics like Hemingway or Fitzgerald to the famous J.K. Rowling, to their favorite cafes.

Each literary cafe is unique in its outer characteristics, yet there’s one thing creatives or authors who frequent these cafes all have in common—a love for the written word. From Argentina to France, iconic literary cafes can be found in countries all around the world. 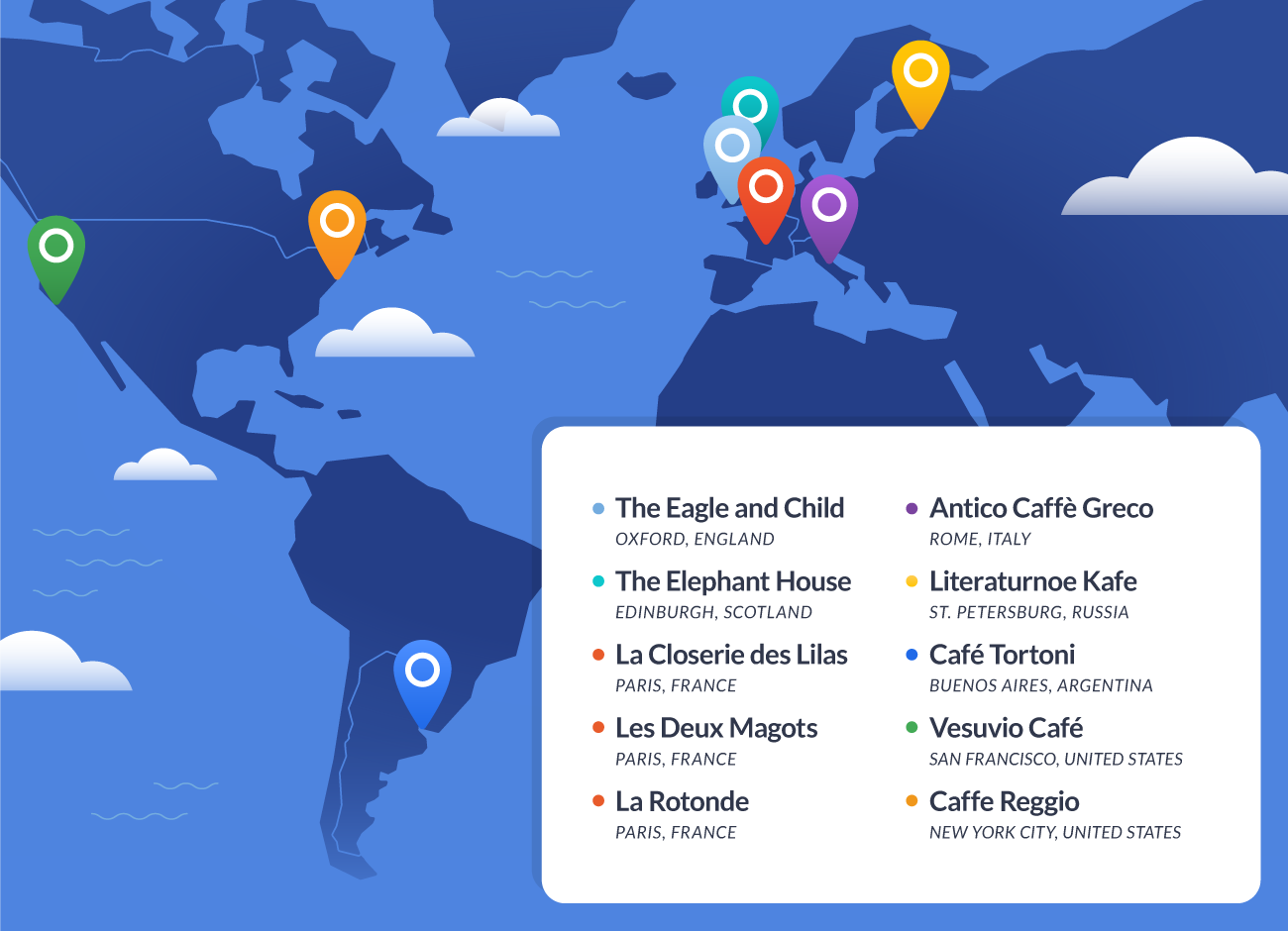 With this route, you'll know exactly where to look to get inspired. Whether you identify with the counterculture Beat Generation authors or love to get lost in a fantasy novel like Lord of the Rings, explore what makes these ten literary cafes iconic.

The Eagle and Child – Oxford, England 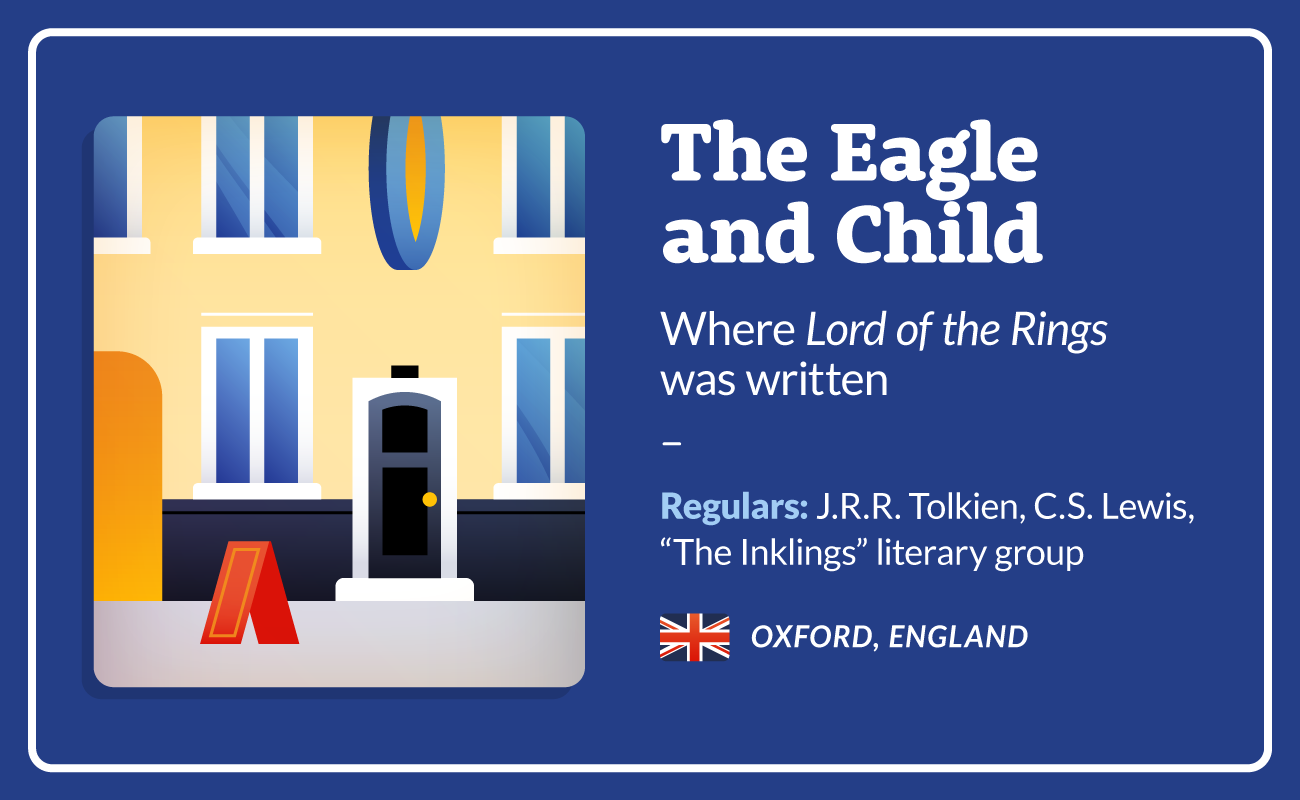 In the 1930s, J.R.R. Tolkien, C.S. Lewis and the rest of their writers’ group, the “Inklings,” held weekly lunches here to discuss their writing and ideas. The group would meet in the private lounge they called the Rabbit Room, and explore fantasy ideas around wizards and hobbits.

At the time, Lewis was crafting his Space trilogy, comprising Out of the Silent Planet, Perelandra, and That Hideous Strength, and Tolkien was writing the Lord of the Rings series. The cafe now displays pictures and prints from these widely popular novels. 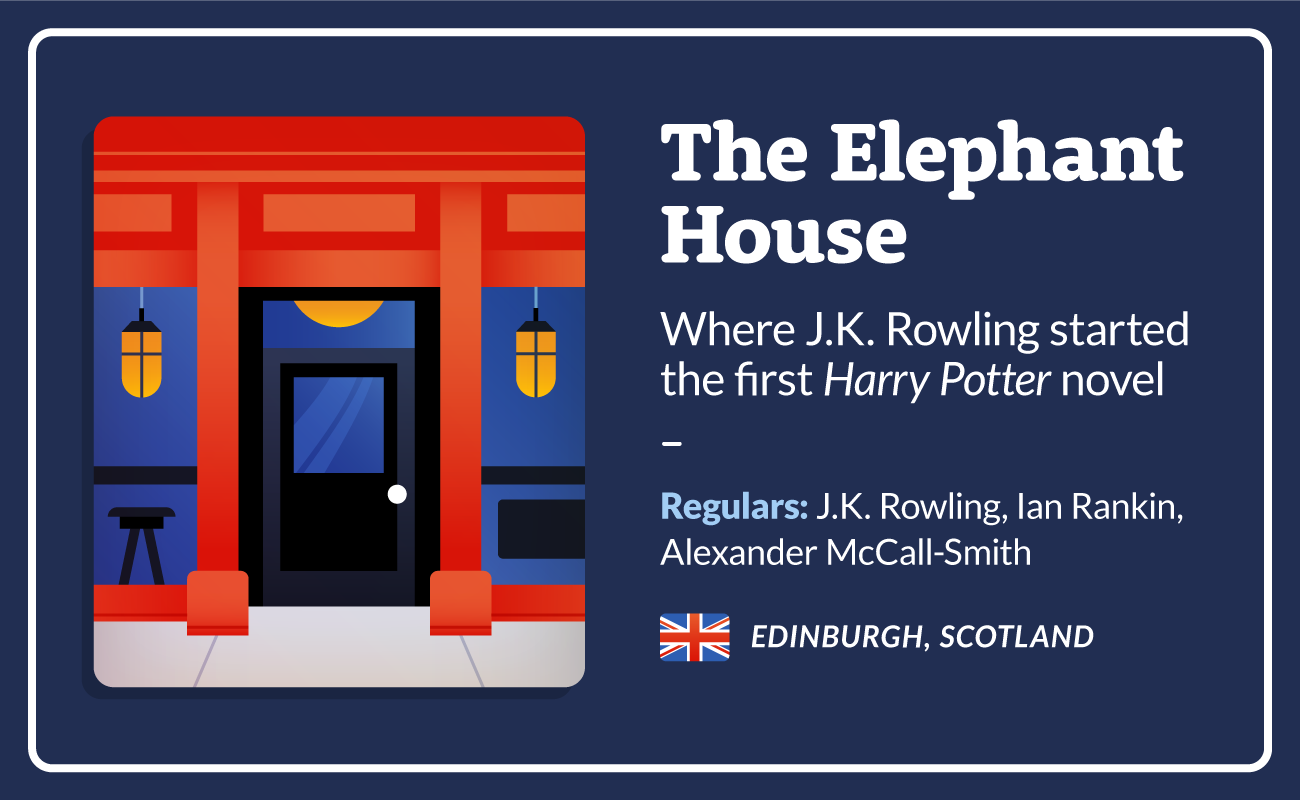 Located on the George IV Bridge walkway, The Elephant House was established in 1995. It’s now esteemed as one of the most popular tea and coffee houses in Edinburgh.

Elephant House was made famous by J.K. Rowling, where early on in her career she frequented the cafe for inspiration. Rowling even wrote the majority of her first novel Harry Potter and the Philosopher's Stone, at this iconic cafe. It’s no surprise why writers come here to get inspired. If you’re sitting in front of a big window seat, you can peer out to a stunning view of Edinburgh Castle. 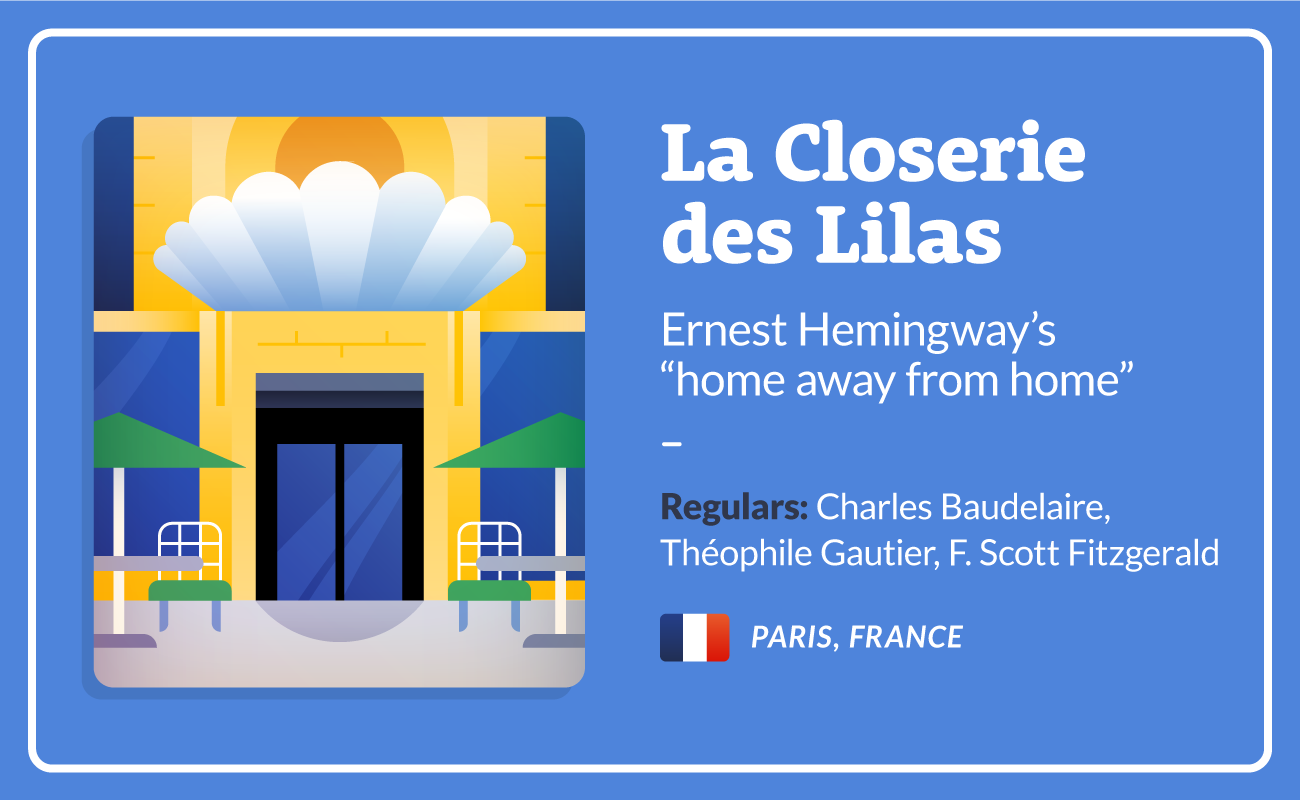 Considered to be Ernest Hemingway’s “home away from home,” La Closeries des Lilas perfectly encapsulates the charm and artistic flair of Montparnasse, Paris. Hemingway would visit regularly to write, and it was the first place he read his friend Fitzgerald’s manuscript of The Great Gatsby. Famous writers and poets would flock to meet here for regular Tuesday poetry readings.

The cafe attracted many American expats like Hemingway, Gertrude Stein, and John Dos Passos. Other famous regulars include Ezra Pound, Théophile Gautier, Amedeo Modigliani, Oscar Wilde, Charles Baudelaire, and more. James Joyce even chose to celebrate here when he found out the news that his controversial novel, Ulysses, would be published by a major publisher. 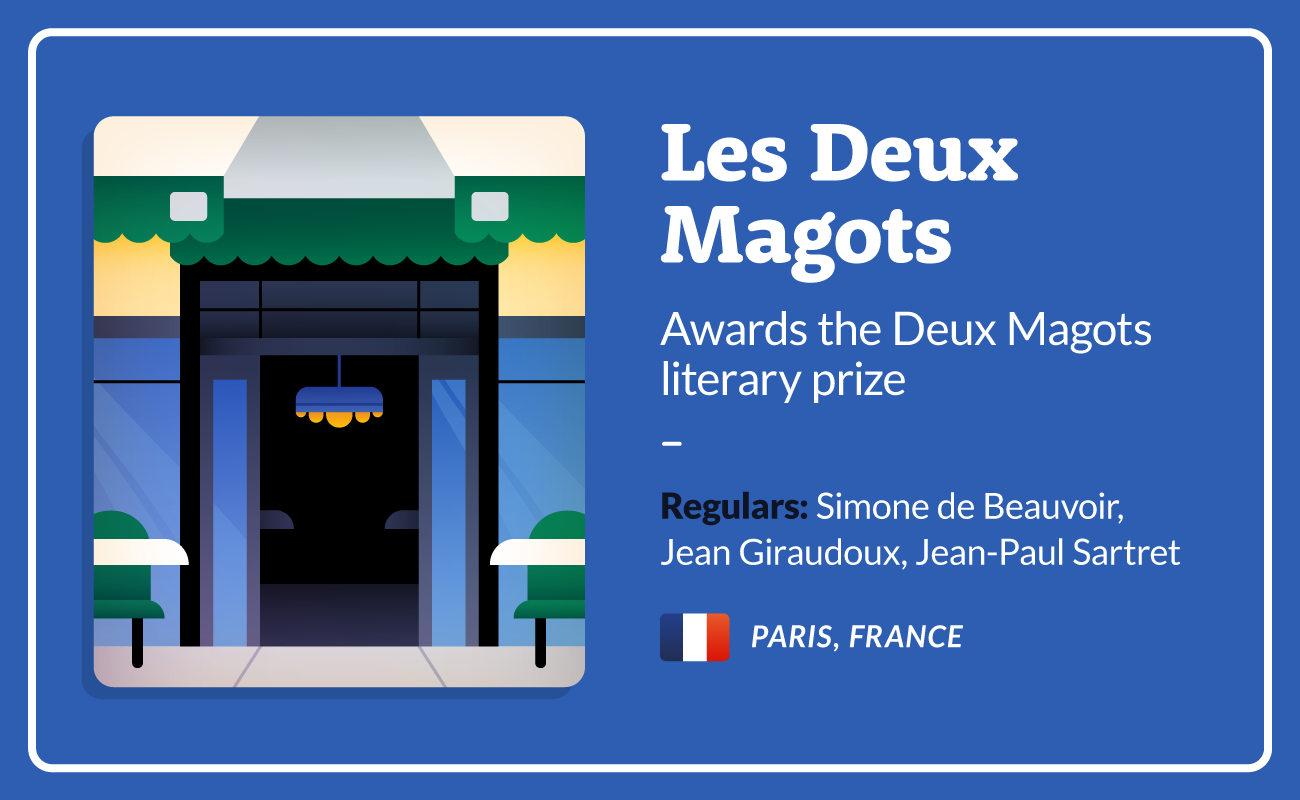 One of the oldest cafes in the Saint-Germain des Prés area of Paris, Les Deux Magots (which translates to “Two Chinese Figurines"), was once a popular hub for literary intellectuals. Now a popular destination for tourists, it still attracts artists, poets, and writers from all around the world.

The cafe coined its own literary award, the Prix des Deux Magots. It's been awarded to a new or unconventional French novel every year since 1933. Great writers such as James Baldwin, Chester Himes, Richard Wright, Simone de Beauvoir, Jean Giraudoux, and Jean-Paul Sartre spent time here. 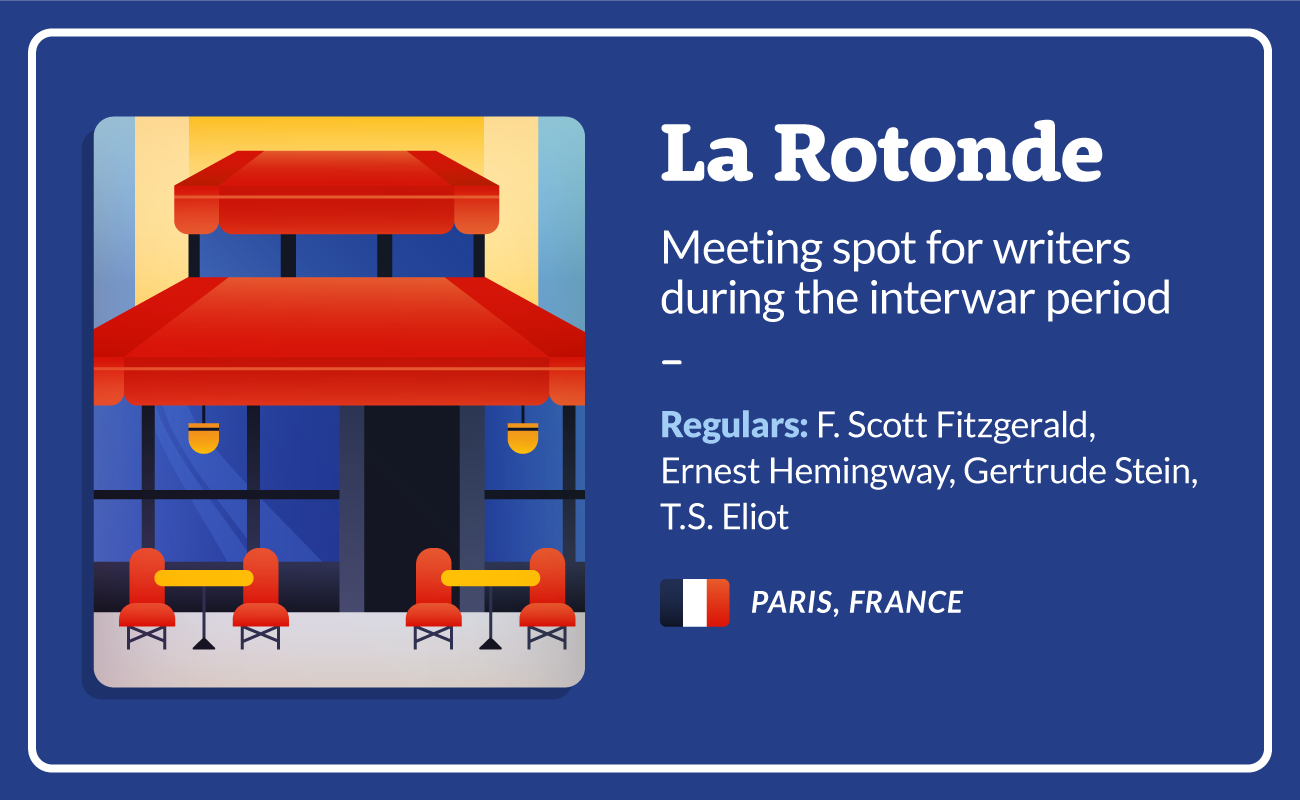 This legendary cafe was popular among writers, sculptors, painters, poets, and composers. Famed authors like Ernest Hemingway, F. Scott Fitzgerald, Gertrude Stein and T.S. Eliot frequented La Rotonde. It boasts traditional French food, a warm atmosphere, and stunning decor. During the war periods, La Rotonde was known for welcoming starving artists by holding the artist’s work as collateral and then graciously returning it when they were able to pay their bill.

Ernest Hemingway says it best in a reference in his novel The Sun Also Rises, “No matter what café in Montparnasse you ask a taxi-driver to bring you to…they always take you to the Rotonde.” 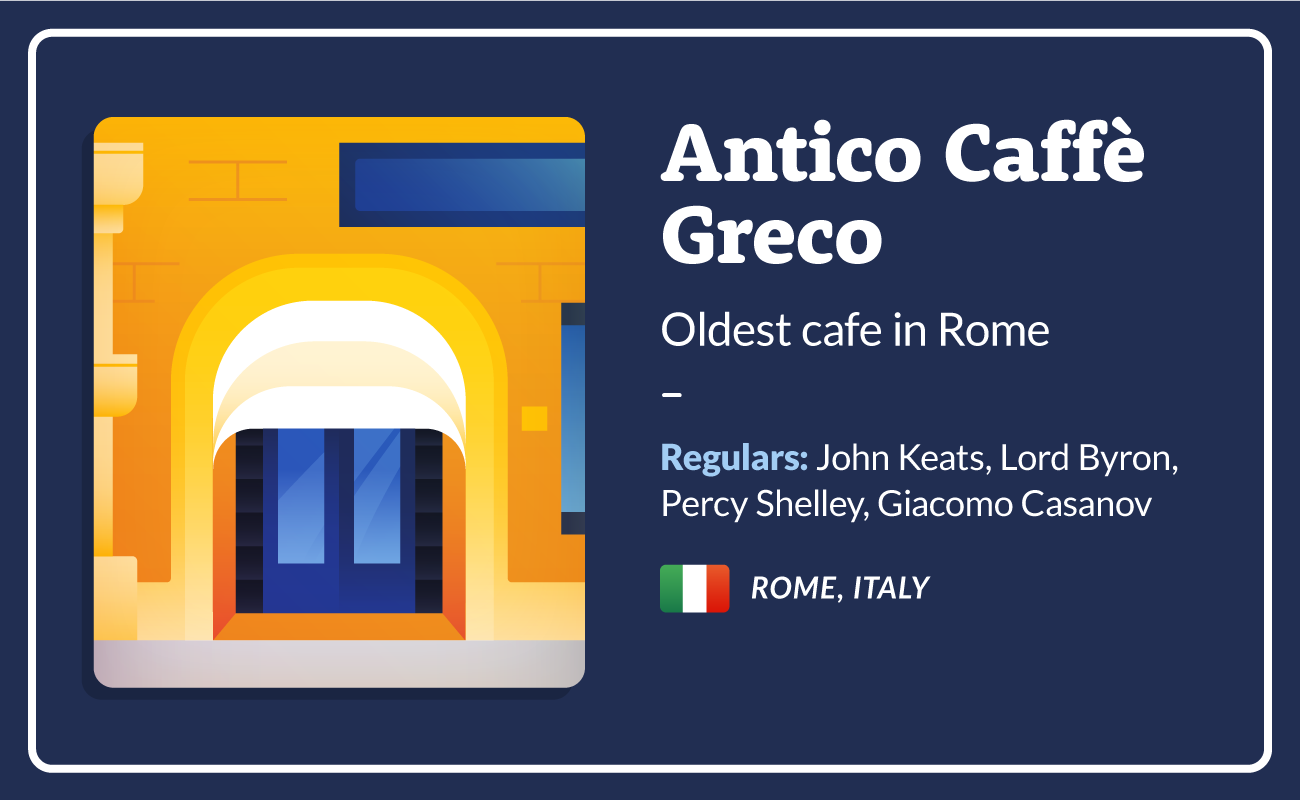 If you’re looking for a cozy corner on a busy street to curl up with a good book, look no further. Antico Caffee Greco in Rome is an idyllic 250-year-old cafe in the Eternal City that attracted politicians, literary geniuses, artists, and philosophers. 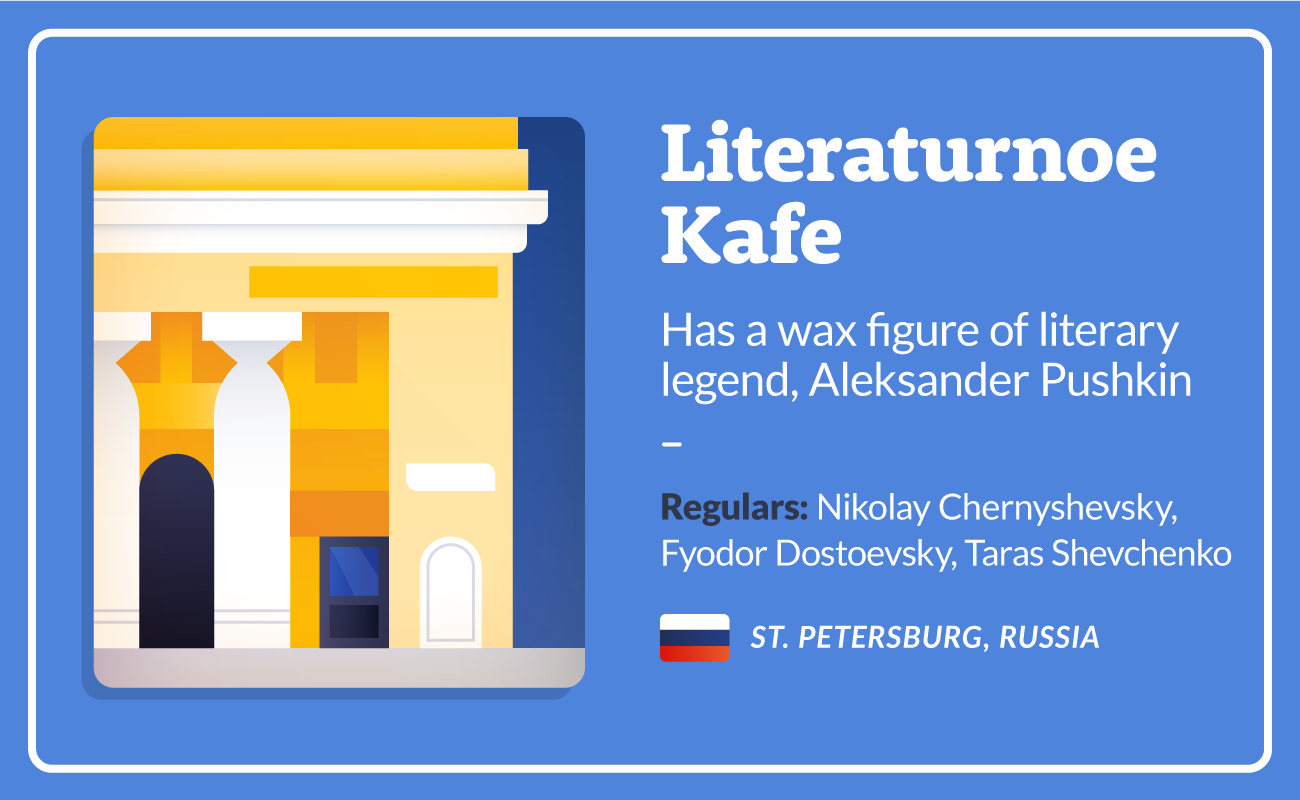 In the heart of the cultural capital of Russia, you wouldn’t want to miss a visit to Literaturnoe Kafe, which literally translates to “The Literary Café.” Established in 1813, it’s been quoted as a favorite cafe of famous Russian writers such as Nikolay Chernyshevsky and Fyodor Dostoevsky.

It’s also rumored that the cafe was well-known Russian poet Aleksander Pushkin’s last stop and meal in 1837, before dying in a duel. Inside the cafe, you’ll find a wax figure in remembrance of Aleksander Pushkin, sitting at a table by the window. 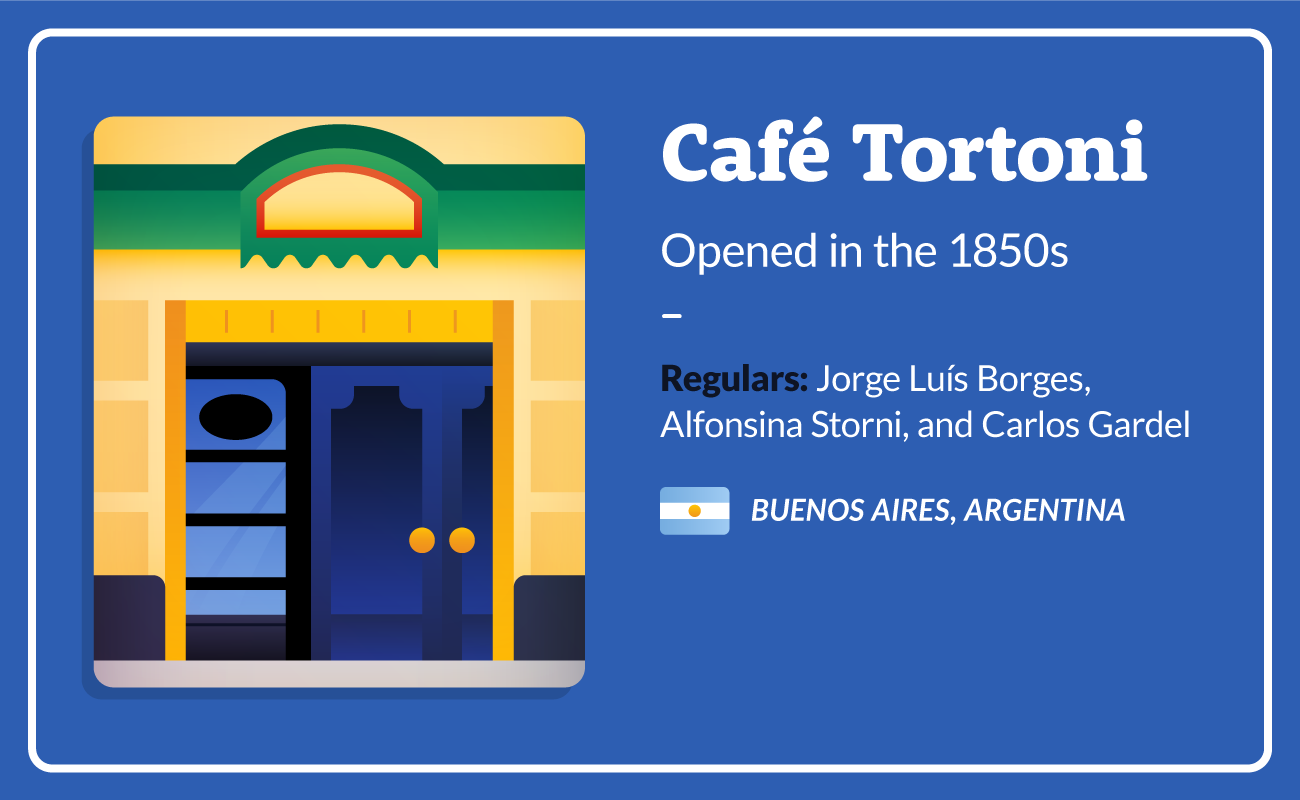 This beautiful Argentinean café is a favorite of author Jorge Luis Borges, who wrote some of his famous work here. It’s situated cozily in the shade of two hundred year old trees and is loved for its unique ambiance.

Modernist poet Alfonsina Storni was also a frequent visitor in the 1970s. You may be surprised to find wax figure forms of legends Borges and Carlos Gardel, sitting at their “favorite table.” 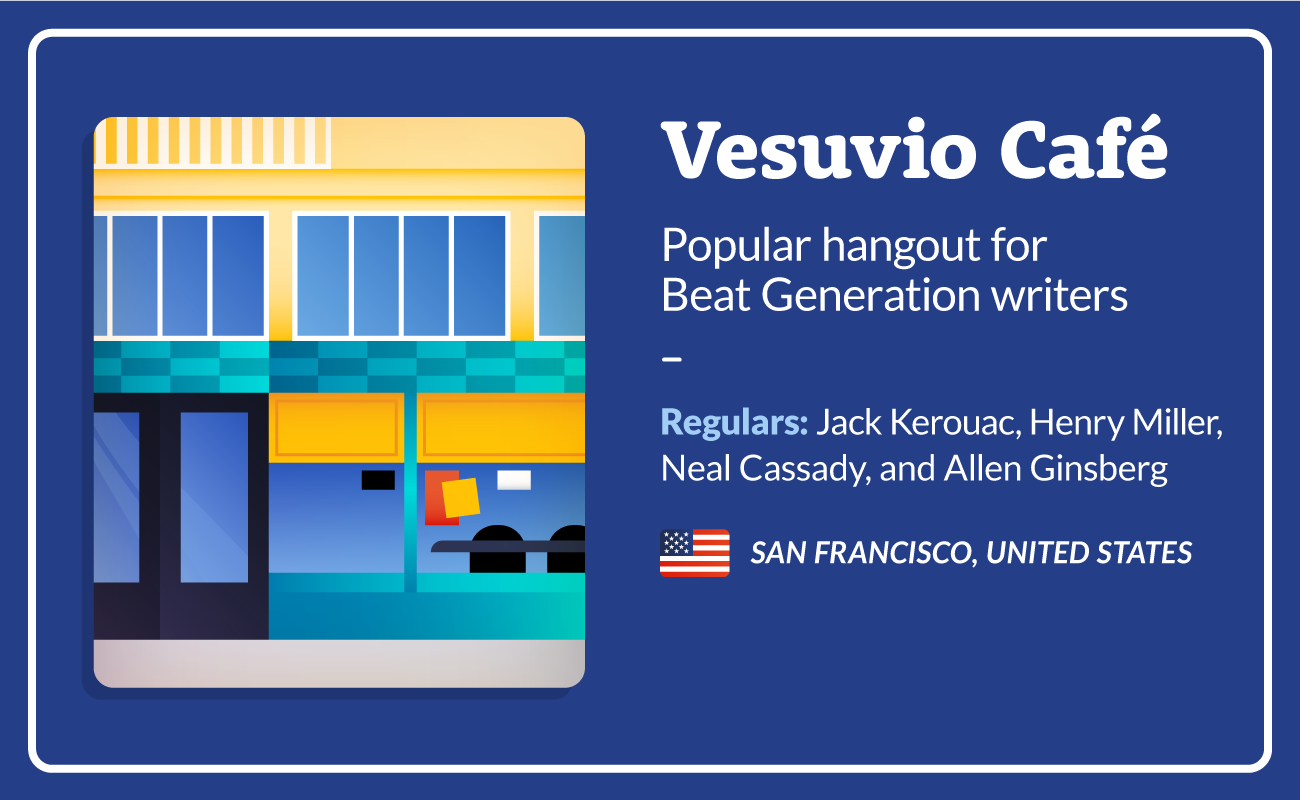 Located across the alley from Lawrence Ferlinghetti‘s City Lights bookstore, the funky Vesuvio Cafe was established in 1948. It’s now a historical spot known for literature, jazz, and art. It served as a spot for authors of the Beat Generation in the 1950s, a literary movement whose work experimented with explicit subject matter like sex, drugs, and hedonism.

Famous poet and novelist Jack Kerouac was a leading figure for this movement. While other well-known writers such as Henry Miller spent time at the Vesuvio Cafe, it remains a destination for visitors from all over the world. 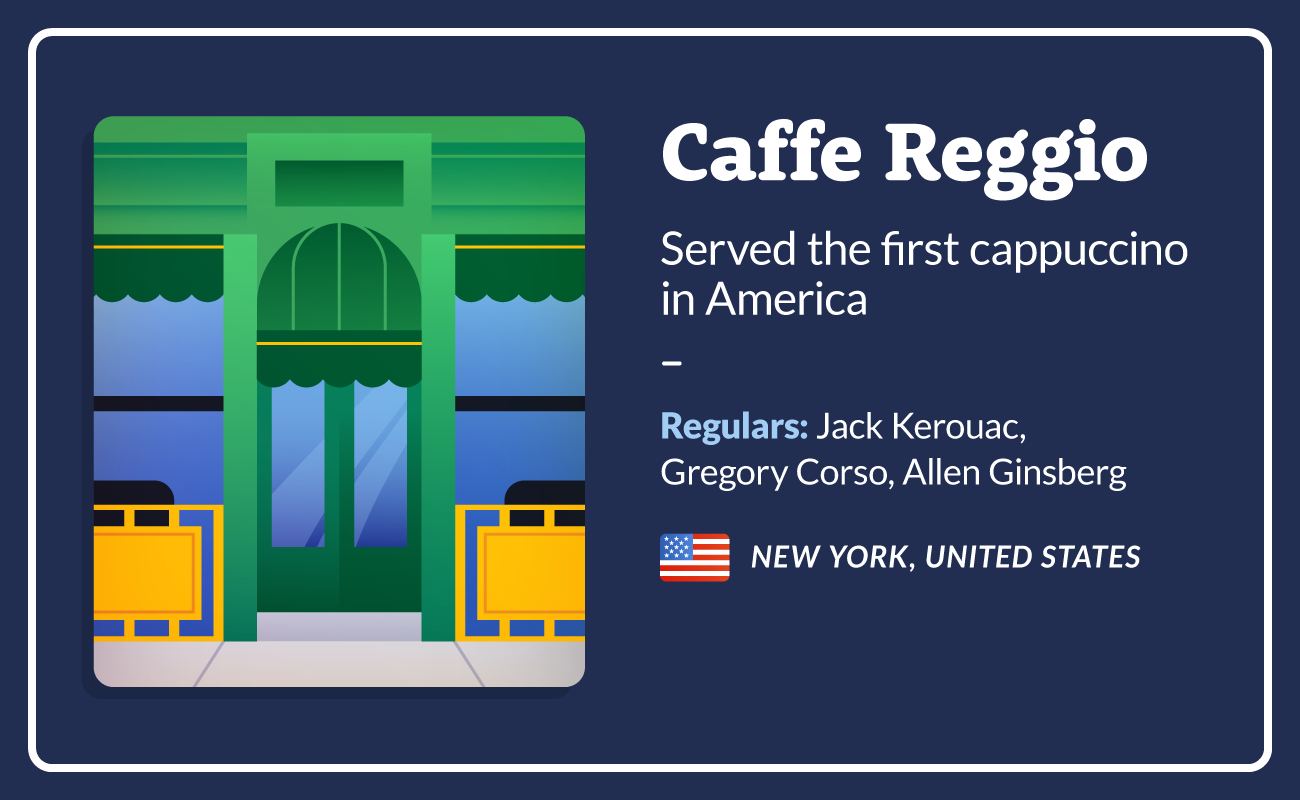 The oldest cafe in New York City, Caffe Reggio was founded in 1927 and claims to be the first coffee shop to serve cappuccino in America. Aside from serving up a delicious cup of joe, it’s a popular spot in Greenwich Village for writers, art connoisseurs, and history buffs alike.  It served as the backdrop for fictional bohemians in the movie

Inside Llewyn Davis and was a favorite location for many of the Beat Generation writers, such as Jack Kerouac and Gregory Corso. Today, you’ll likely find NYU students and professors hanging out.

Imagine sitting in the same cafe—potentially even in the same spot—as your favorite authors did when they wrote the books you love. If the idea inspires you, these iconic literary cafes should be added to your bucket list. Use our map to start planning your next destination. Before you plan your travels and embark on an inspiring literary tour, be sure you’re up to date with the latest ETIAS travel authorization updates.